Disclaimer: By reading the following post, you may or may not be red-flagged as a terrorist/extremist by domestic and foreign intelligence services. Neither the staff of Blogger nor Conceit and Sociopathy will be held liable for any detention, interrogation, torture, or PTSD that may or may not occur. So if you receive the rubber glove treatment at the airport or border, or one day wake up in one of the many secret prisons around the world, it ain't my fault, 'cause I warned you.


America has sunk to a new low.

The Great Satan has committed the ultimate evil act upon the peace-loving people of Winnipeg; a grievous, sinful, detestable act so terrible, the dead cried out in Heaven.

The Crusaders have taken the title of Slurpee Capital of the World from us, favoured of the Heavens.

It will be a cold day in Hell before I let the Infidel take what is rightfully ours.

I urge all Winnipeggers to head out to the nearest 7-Eleven for a Slurpee or two, whenever you can, so we may reclaim that which is ours by Divine Right.

For every Slurpee you buy, seventy-two virgins will await you in heaven.

The Great Satan must be punished.

Allah Akhbar!
Posted by Shaun M Wheeler at 20:10 No comments:

The dating game is getting a tad expensive.

I met a nice girl last week and, instead of my usual "get to know her for a while before making a move" routine, invited her out for a night on the town.

So, Friday we went out on our first date.

I borrowed a friend's car, as neither I nor my date own a (running) vehicle. The tank was virtually empty, so I pumped $20 worth into the tank, figuring we won't be doing a lot of travelling.

Whoa - twenty bucks doesn't buy much, does it?

So, I picked up my (lovely) date, and headed out for a couple of drinks while we decided where we wanted to eat. A couple of martinis later, we decided on a "middle-of-the-road" restaurant near Polo Park, had drinks, appetizers, dinner, and dessert, and decided to head out to a movie.

We watched our mediocre Hollywood action-yawnfest, scarfing down horribly overpriced junk food, then headed out for coffee.

After a couple of hours of great conversation, I dropped my date off at her place, said goodnight, and headed home.

Total cost? Nearly $200 for one evening.

It was worth every penny.
Posted by Shaun M Wheeler at 08:07 No comments:

On Planning for One's Retirement

A new acquaintance asked me a heavy question today, "CJ, what do you want out of life?"

My answer was, of course, "A condo in Luxembourg City".

An answer which led to another question, "Where's Luxembourg City?"

CJ: "In Europe, near Belgium and the Netherlands."

NA: "Oh. Why would you want to move out there?"

NA: "Do you speak the language?"

NA: "Are you from there? Do you have family there?"

CJ: "No, my family originates from England and Ireland."

NA: "Do you have friends out there?"

NA: "Then why do you want to move there?"

OK, so I lied to her. The fact of the matter is, I've had a fascination for the Grand Duchy since I was little... ever since I saw some paintings of the old fortifications at Luxembourg City when I was eight... and have been nearly consumed by the desire to visit for years.

So, when 2010 rolls around and I embark on my European trip, Luxembourg is my ultimate destination. Sure, I'm going to visit Germany and Belgium, but for the three or four weeks I'm there, at least two will be spent in the Grand Duchy (Thanks again to Cherenkov for a previous bit of advice regarding trimming down my itinerary).

Now, part of the reason for my trip is to scout out areas for my retirement. I'm planning to move to Europe when I retire in just under thirty years, with the intention of buying a condo in a major urban center. So, to kill a few minutes on my lunch break today, I hit the Illuminati oracle again...

One condo/apartment I liked was in a mixed-use building, which is something near-and-dear to my heart: 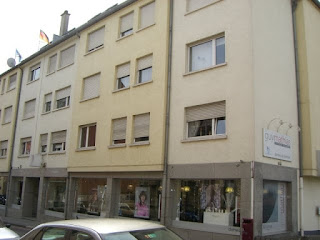 Well, my French is a tad rusty, but you get the idea.

I have thirty years 'til retirement. Time to start saving.