By popular request, I've started a new blog to document the progress of my latest caper - the four-season gazebo.

I've dubbed the project "CJ's Speakeasy", and the whole affair is documented here.

(Edit 06/17/2019:  The link is long dead.  In a nutshell, The Speakeasy was a project to turn my unused garage and carport into a four-season gazebo and patio, complete with stone fireplace/barbecue, wet bar, entertainment system, and bathroom.  I had been reading far too many architecture/design magazines and came up with a Mid-Century Modern-meets-Art Deco plan that not only looked great, but would have been relatively inexpensive to build myself.  The plan was abandoned when Jill and I got married and bought a car.)

According to the CBC, the new-fangled tube dykes that were supposed to be the big stars of this flood are failing.

I've said it before, and I'll say it again:

Inflatable will never beat the real thing.
Posted by Shaun M Wheeler at 16:51 No comments:

Labels: Bastardry, Euphemisms and/or Innuendo, Too Lazy To Write A Real Post

Lately, I'm convinced that a seeming majority of folks in this province are indeed under-intelligenced.

At work, we've been inundated, deluged even, with calls from people who are in a mad panic for water suction and discharge hoses - and who get mad when we tell them we're sold out (a season's worth sold out in four hours, to better prepared people) and won't be getting any in for a couple of days.

When asked why they waited so long to buy if they're in such dire straits, most said "Because we didn't know the flood would be that bad, and didn't want to spend the money if we didn't need to!"

I will take back the comment that "the seeming majority of folks in this province are indeed under-intelligenced". It was said out of frustration, the sheer amount of people showing up at my counter today who are this unprepared for a flood that's been in the news for the last several months is nothing short of astounding.

Painting everyone with the same brush however does a great disservice to those truly affected by the flood (as well as the vast majority of folks had the sense to plan ahead), and for that I apologize.

Apart from that, I'll be expanding upon the "Emergency Unpreparedness" situation as the day progresses... we're busier than Hell here today... I've only been trying to eat my lunch for the past 2-1/2 hours ;)

It's now Wednesday, a day later. I've had a bit of time to reflect on yesterday's workday.

It was hectic, frantic even, but the situation wasn't unique to our shop. Over the course of the day, I had the opportunity to "talk shop" with some of our regular customers (and competitors - the hose & fitting business in Winnipeg can only be described as "incestuous"), and they all said the same thing:


"People have to plan better"


The vast majority of our customers are agricultural dealers, construction firms, equipment rental shops, Princess Autos, and mechanical/service centers, with a few big farms and a number of Hutterite colonies thrown in for good measure. These customers, our "bread and butter", are not the problem. Most have been in the business for years and have seen the trends, seen the cycles, and know when to have stock (and how much stock to carry).

But all the planning in the world will not save you from the average consumer.

Yes, this is Winnipeg, aka Wholesale City, where "it's always better, cheaper, and faster at the place up the street".

We share a good rapport with a number of our competitors, as we're all in the same general vicinity. Each of us will send the others our "cast-offs" whenever we're out of stock on an item (or if the customer is after something we don't carry), and we're all familiar with each other's product lines (and thus each others' pricing).

Of course, this fact seems to escape most of our casual customers, some of whom will try to chisel us on the price of our products. I can't count the number of times someone will say "Really? Your competitor up the street is selling the same hose for twenty bucks cheaper!", which typically results in a call to the competitor who typically says "Yeah, they said you had it twenty bucks cheaper!", and we share a good laugh. What synchronicity!

It'd be especially fun to do this on speakerphone, with the customer standing there... more fun if we initiated a conference call to several competitors... but that's conducive to repeat business.

But our incestuous price-fixing collusion is a story for another time (There Is No Cabal!). Where was I? Oh yeah, the flood...

(to be continued throughout the day)
Posted by Shaun M Wheeler at 11:02 3 comments:

I took my pet camera for a walk today.

The original plan was to start at The Forks, and follow the river north to L'Esplanade Riel, The Waterfront, Juba Park, the Pumping Station + Alexander Docks, the Disraeli bridge, the Redwood Bridge, then walk along Scotia to Kildonan Park, then head over to Chief Peguis Trail.

Instead, I hung around The Forks, St. Boniface, L'Esplanade Riel, The Waterfront, and Stephen Juba Park. Took about 600 pics in all. I would have taken more, but I filled both of my camera's memory cards... (My ancient Olympus D-460Z uses 128Mb Smartmedia cards).

I ended up hopping the bus home, dumped both memory cards to my Linux box, then walked on over to Kildonan Park, via Scotia. Took a little detour to Louis Greenburgh Plaza and treated myself to a little history lesson, which you'll see in a later posting. I walked through Kildonan park for a couple of hours (snapping more pics and filling yet another card), completely forgetting I wanted to head over to Chief Peguis Trail...

I'll be busy this week as I finish my originally planned route, then sorting through the pics. I'm thinking of either starting a Flickr page, or resurrecting my old webpage to house the pics. I'll cross that bridge when I come to it...

Here are a few samples of the pics I snapped today. Once again, I will remind my readers and casual browsers to read the copyright notice at the bottom of the page before trying to use any of these pics. This means you, CBC, CTV, and the rest of you thieving media jackals! ;) 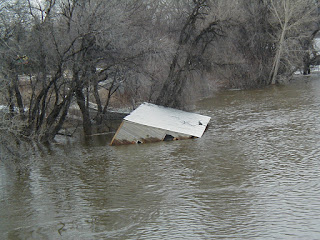 What the...? Isn't that the Canoe Rental shack? Hmmm, so much for renting a canoe today... 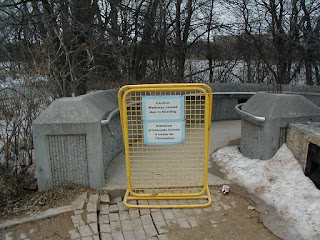 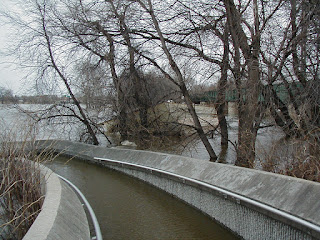 This was as far as I could go, at least without hip-waders.. 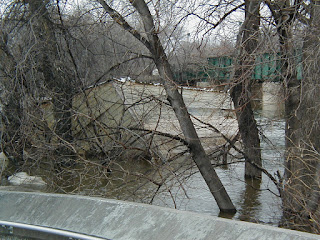 See the green bridge on the right? Ordinarily, the canoe shack is on the other side of it. 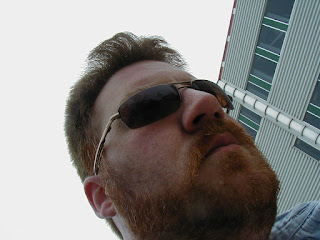 Get used to this face. You'll be seeing a lot more of it in the future. (Although I'll be a great deal more presentable...) 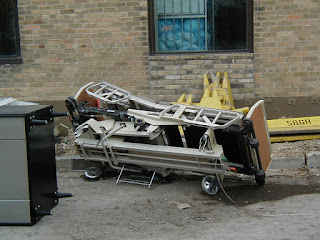 I urge all my readers to contact Premier Doer and demand an end to Parking Lot Medicine NOW! 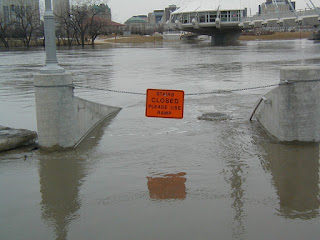 Please use ramp? Okaaayyy, but... 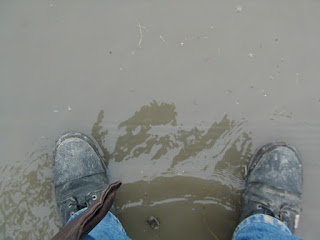 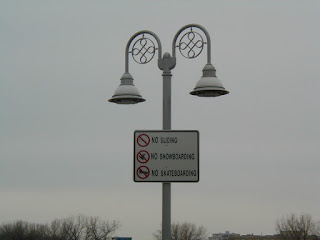 They'll be adding "No Swimming" to this sign in short order, methinks.

A small part of this afternoon's work. There were a lot of people out and about today, taking advantage of the warmer temperatures.. at least until it started to rain.

While walking along the footbridge at the Forks, a woman stopped to watch me take a few pictures.

Woman: Are you from The Sun?

Me: Originally, yes. However, we found it was far too hot there to live comfortably, so we moved here to Earth. It's much nicer here.

Me: Just kidding. No, I'm not from The Winnipeg Sun.

Woman: Oh, I thought you were a reporter.

Some people have no sense of humour.
Posted by Shaun M Wheeler at 20:28 No comments: