Well, I shouldn't say "finally", as we had a bit of a dusting about a month ago... but it melted that same day.

Hopefully it's here to stay. Environment Canada's Magic 8-ball is calling for more snow (or the possibility thereof) until next weekend. 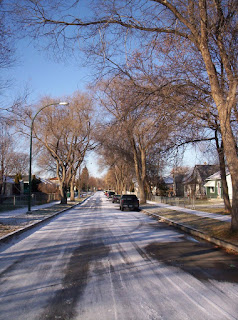 In the middle of my street, facing West.
Wish I'd taken this shot a few hours earlier...

I am eagerly awaiting the onset of Winter (can you tell?). I bought a nice pair of skates (my first pair in nearly twenty-five years) and am chomping at the bit to strap on the blades and head to Kildonan Park (or The Forks).

Might even break out the hockey stick and call the mates over for a pickup game...


Truth told, as excited as I am about the prospect of a good skate, the real reason I posted this was to test my newly-repaired Kodak C300 digital camera. I bought a replacement battery door for the camera on eBay a few weeks ago, hoping it would be an easy fix.

Not twenty minutes after opening the envelope, my camera was fixed.

Now, I suppose I could have gone out and bought a new camera, or stuck with my decade-old Olympus D460Z, but truth told, I have a soft spot for my ol' Kodak. It was my first digital camera, and has travelled nearly everywhere with me... and I still have a lot of accessories specific to the camera which would be rendered useless should I upgrade to another.

That, and the replacement part cost me $5 USD (and twenty minutes of my life), whereas a new camera woulda set me back at least $100... call me sentimental, call me cheap, call me all of the above. With the money I saved, I went out and bought a Kodak camera bag to hold both the C300 and my Printer Dock Plus, also picked up several photo cartridges and 4x6 photo paper for the unit.

"So who cares about so-called 'real photographs' anymore?" you may ask, "Especially in these days of photo blogs and digital picture frames?"

Well, I've anticipated your question this time. My answer to you is "Old people".

The fact of the matter is, neither of my grandmothers (or other elderly relatives) own a computer. We bought my paternal grandmother a digital picture frame loaded with pictures of the family, and I don't think it ever left the box once she got it home. Both are more inclined to open a photo album rather than a photo browser any day of the week... but I digress.

Personally though, I rather like the idea of the digital picture frame. In fact, I'm looking at picking up a couple for myself - one for my desk at work, one for the end table in my living room, and maybe a pocket-sized one for my keychain (for my Gameboy Camera pictures, LOL).

One thing I'd like to see would be a digital poster... like a digital picture frame, but larger (2ft x 3ft viewable area) in scale. That'd be cool.

I've also thought about turning one or more of my old laptops into a digital frame (basically just the screen, logic board, and CF drive), one that could be updated by WIFI or Bluetooth. There are similar hacks out there, but I gotta do it my way.

Speaking of hacks, here's a goodie - how to turn your conventional oven into a 700° pizza oven!

I have to admit, this one looks tempting... I've been toying with the idea of buying a pizza stone, and this idea is just crazy enough to be interesting.
Posted by Shaun M Wheeler at 11:11 2 comments: 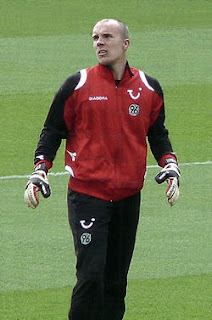 I took a little time to remember and to say "Thank You" for allowing me to enjoy the freedom I have today.

Here's a small sampling of pics I shot around 11am today:

Celebrating die Wende and the Fall of the Berlin Wall

I'd like to say a few words about the twentieth anniversary of the Fall of the Berlin Wall, but I've been hitting the Jägermeister a bit hard this evening.

So I'll let Steve Naghavi and his bandmates in And One do the talking for me.


and again... (embedding's disabled on this one)

There's something about shopping malls that seems to suck the life right out of me.

Yesterday was no exception. After buying my brother a belated birthday lunch at Boston Pizza, we headed on over to Garden City Shopping Center so he could hit the EB Games outlet.

The bloody mall was packed (mostly parents dragging their costumed children from store to store looking for candy) and as such, it was a bit difficult to navigate through the mall...

...especially considering that most (if not all) children lack spatial awareness and are, in general, ignorant of the laws of physics. On a number of occasions, we had to stop suddenly to avoid kids who had also stopped suddenly, the kids crouching down at random intervals to look in their goodie bags...

I can't blame the kids for being excited about Hallowe'en though. Hell, I'm sure my brother and I did the same thing when we were little kids, too.

At any rate, the entire experience left me sapped of energy, so I opted to go home and relax. As there were no interesting soccer matches on TV, and with my chosen internet forums being rather dead, I fired up my most recently acquired shortwave radio to see what I could see (hear what I could hear?).

My most recent acquisition is a Hallicrafters Model S-38A broadcast receiver, a 1946-vintage tube radio. I was in the market for a desktop radio so I could hook up a decent antenna, and given my interest in all things retro, decided upon an older tube-based model. 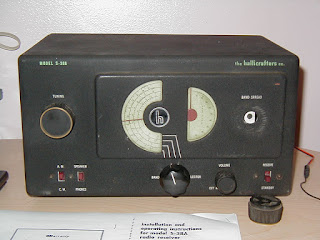 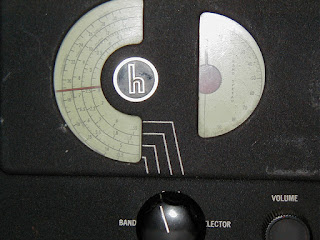 I love the dual "half-moon" dials. The left one is the main "tuning" dial, the right one is the Band Spread dial, or "fine-tuning" dial... which corresponds to the knob that's been broken off...


I sat at my temporary radio desk in my home office, tuning the upper bands back and forth to see what I could pick up. Heard Radio Canada International on a few different frequencies and in a few different languages, even picked up Radio Nacional Amazonia in Brazil, which I'd never heard previously (not even on my more contemporary radios). After a couple of hours, I started becoming bored, so I tuned the radio to a band which is normally deadsville: the 22 to 25-meter band...

When the dial reached 12160 KHz, I could barely make out a couple of male voices. I tried to tune my active antenna and... who should I hear, but Bud Abbott and Lou Costello!

12160KHz is a frequency used by religious/paranoid nutjob broadcaster WWCR, who broadcast a show called "The Golden Age of Radio" every Saturday at 2200UTC. Now, I love old-time radio, so of course I listened to the remainder of the show (a good 45 minutes). Abbott and Costello's routine (originally broadcast in 1951) lasted until 4:30, after which came "The Archie Andrews Show", based on the Archie comics series but sounding more like "Leave It To Beaver meets The Great Gildersleeves"...

I couldn't help feeling a tad disappointed when the show ended... it was fun listening to radio programs originally broadcast when my radio was still relatively new. As though this was how these shows were meant to be heard... played at low fidelity on an old tube radio.

One thing's for sure... I'll be there next week - same time, same channel.

Yesterday being Hallowe'en, I think it would have been cool for them to have played Orson Welles' infamous War of the Worlds broadcast... but I guess we can't have everything.