I Love Winnipeg Cat, and McNally-Robinson in Trouble

I love the Winnipeg Cat blog.

Call it a guilty pleasure, sort of like sneaking a chocolate bar or bucket of fried chicken while on a strict diet. Many thanks to James of Slurpees and Murder fame for bringing this about!

I generated my first submission a few minutes ago, hope it makes the cut: 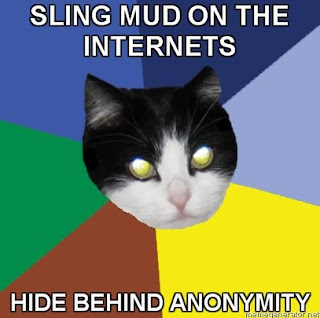 This subject has always been a pet peeve of mine...

Also, just got word that McNally-Robinson is fighting bankruptcy and are, in fact, closing their Polo Park store. Truth told, I knew they were headed for trouble when they moved their store from Portage Place to Polo Park (and opening a store in an upscale Toronto mall) while in the middle of a recession, so they've essentially brought it upon themselves.

Some people will tell you to "let the market decide". Well, I'm a part of that market, and I decide that I want McNally around. To this end, I'll be heading out to pick up a few books I've been putting off buying, and urge you all to do the same.

Join the Facebook group while you're at it.
Posted by Shaun M Wheeler at 18:57 3 comments:

A Secular Happy Annual Gift Day to all o' ya!

We here at C&S would like to take this time (while we're still mostly sober) to wish both all our readers a very Merry Christmas!

We'll be raisin' a glass to you and yours... all the best to you this Holiday Season!

Want all the fun and excitement of the Holiday Fireplace but can't afford to sit in front of your TV all day?

Never fear, we here at the internet have you covered!

(Sorry folks! I've received word that the embedded video was overlapping the right-hand columns of the blog in certain browsers. You're not missing anything important, but in the interest of fair play, I'll simply link to the video instead!)
Posted by Shaun M Wheeler at 08:39 4 comments:

Labels: Holidays, Internet, Too Lazy To Write A Real Post

Beer-soaked Philosophy and The End of Days

It was pub night tonight, which means another helping of half-baked and not-well-thought-out commentary on the state of the planet.

Me an' Fry were in our usual places at Tavern United (McPhillips) tonight, shooting the shit and keeping each other abreast of the mundane goings-on in our lives. It was relatively uneventful, no plates were thrown at us, I didn't have the urge to hit anyone, and we barely noticed the people in the surrounding booths. Meals were good, the Guinness was cool and plentiful, all-in-all it was a good evening.

We spoke about the usual crap: our lives, our respective families, society, and of course, weaponry. Now, we've been enamoured of clandestine weaponry since we saw our first spy movies as kids, so we tend to keep abreast of such things. Fry spoke at length about a fully automatic machine pistol (that used a Glock mechanism) that folded up into a rectangle the size of a VHS tape... I mentioned that I'd seen such an animal on Youtube a few years ago and so we compared notes. We both agreed that such things, while cool and all that, are thoroughly impractical. In the time it takes to draw the rectangle from your coat/briefcase/undergarments and deploy it, you'd have been shot several times by your adversary who was armed with a simple pistol... the only real value these things have is in their collectability and the effect it has on awestruck rubes. (Ga-hyuck-hyuck-hyuck! Git a load o' that, ma! Wonder if'n they got it in Beta?)

We followed that with a twenty minute discussion on hand-to-hand weapons, cane swords, halberds, and things of that nature, but then one of the waitresses bent over and our trains of thought derailed as we stared at her caboose...

Once the conversation got back on track, it quickly (and inevitably) turned to our respective jobs. Now Fry has been wanting to get out of his work environment for a while now, a fact he shared with one of his other friends over the weekend. His friend has a philosophy that can be summed up as "unless you enter into a job with the sole intention of being the boss, you're a useless, ambitionless piece of shit who should never have been hired (or even born) in the first place." Fry was stunned silent when his friend told this to him, and I could tell it was making him upset as he relayed the conversation to me. Fry's philosophy (like my own) is that "work is merely what I do for money. I'll do what I have to, consistently and to the best of my ability. I leave my outside life at the door when I arrive, and leave my work life at work when I leave." When Fry tried to explain this to his friend, all he got was "I'd never hire you for anything with that attitude, not even my fucking janitor's assistant! You gotta man up and be something and someone!"

Now, you really have to know this particular friend to understand the weight of his words. I've known him for nearly the same amount of time as Fry has, and to be honest I've never liked him... he's nothing more than your garden-variety bully. When Fry relayed the conversation to me, I had visions of this asshole's face turning purple while he yelled at Fry, poking his fingers into my buddy's chest with every word. Apart from pissing me off because he's taken a huge chunk out of my best friend's self-esteem, the friend's statements bothered me on a logical level as well. My blood began to boil yet again.

First off, cocksucker, nobody would never work for a psychotic like you. Judging from your words (and past track record from what I understand), you'd be the Boss from Hell - bullying those under you, power-tripping, constantly yelling, and ruling with an iron fist. You'd never be able to keep people, and one day they'll probably find you murdered in your office if you don't have a heart attack, stroke, or aneurysm first.

Second, wrap your tiny little mind around this, stud: not everyone is cut out to be a leader. Not everyone can run a business. Not everyone can delegate responsibility or has the knowledge to pool their resources effectively. Not everyone can inspire their charges to greatness. Not everyone can display sound judgement while making a split second decision. Not everyone can handle the pressure or even the burden of being at the top. And with your own words in mind, who the Hell wants to be watching over their shoulder constantly for other cocksuckers like you who are all too willing to stick the knife in your back at the first opportunity?

Third, what's wrong with being happy with what you do?

I asked Fry to bring the friend along to our next pub night for a polite conversation, since he wouldn't give me the guy's number or address. I doubt he'll do it... but I digress.

Aaaaaanyway, once I finished my beer-with-a-side-order-of-dystemper-and-chest-pounding-hold-the-mayo , I ordered another beer to calm myself down and we continued along on the subject of ambition:

Fry: So does anyone give you grief like that?

SMW: Yeah, on occasion. Not too often, but it happens.

Fry: How do you deal with it?

SMW: I'm usually matter-of-fact and try to present my view in a realistic manner.

SMW: Case in point: One of my coworkers asked me where I saw myself in five years time.

Fry: And you told him "Sitting at a cafe in Luxembourg with a married German woman with whom I'm carrying on a steamy affair." (Fry has heard this story so often he can repeat it verbatim. The rest of you can read it here.)

SMW: Nope. This time I told him I'd probably be sitting at this very desk.

SMW: Yup. He expressed surprise, and asked why I had so little ambition, so I told him that this is merely what I do for money.

Fry: What'd he say to that?

SMW: Believe it or not, he expressed a bit of disappointment that I was wasting my mind and my potential being a mere inside salesman. I told him that in a small branch like ours, there are only three options for advancement: become an outside salesman (requiring him or his partner to quit or get fired, and near-constant travel within the province), become Branch Manager (requiring the boss to quit, retire, or get fired), or transfer to another branch (requiring an out-of-province move and starting at the bottom).

Fry: What did he say to that?

SMW: Not much. He knows I spent a lot of time travelling for my previous employer and grew to hate it. He also knows I'd never screw the boss over, and that if I'm going to relocate, I'm going to move to Europe. He asked me why I stay here, so I told him it's because I like the job, I like our customers and staff, I know what to expect, and there's always something new to learn. That, and it keeps me out of the sort of trouble I get into when I'm left with too much time on my hands.

SMW: I thought he might, but no. He asked me what my life's ambition was, since it's not centered around work.

SMW: Yup. He thought I was of the "wife, 1.5 kids, house in the 'burbs" persuasion. I told him I'm a member of the Voluntary Human Extinction Movement. (I'm not, incidentally. For a good read, folks, pick up a copy of "The World Without us" by Alan Weisman)

Fry: I never should have lent you that book...

SMW: Heh, no kidding. He asked about the movement, so I gave him the rundown. I told him I felt it produced results far too slowly for my liking, and that I'd like to accelerate the process artificially if I could find some way to do so... say, by 2012.

Fry: What was his reaction?

SMW: He asked me why I'd want to wipe out mankind. I told him that mankind is a corrupt, immoral race and that it was time to put the fear of God back into people. I wouldn't wipe us all out, just 99.9% of us. I figure I'd arrange things so that the remaining .1% were scattered in little pockets in various far-flung places around the globe, such that they wouldn't encounter each other for at least a hundred years. I'd also ensure the survivors knew why mankind was punished, so they would constantly live in fear that it may happen again should they resume their wicked ways. I'd give them a little reminder every so often to keep 'em on their toes, and would continue to do so until I died.

Fry: If it didn't work for God, how the fuck is it going to work for you? How long after the Flood did it take us to revert to our "sinful, amoral ways"?

Fry: Yeah. No more beer for you, Shaun.

Fry: And don't quit your day job.
Posted by Shaun M Wheeler at 19:37 No comments:

Top Ten Posts (One of which is hidden)