CJ's note:  the following post was originally written 11/26/2009.  I found it in this blog's DRAFTS folder this evening while migrating posts from my other blog.  It amused me to read it, and I felt it deserved to be published... with a present-day postscript.

The weather's been nice this last week, hasn't it, folks?

Despite the fact I'm champing at the bit to go ice skating on the Red River (hurry up and snow, God damn it!), I've been taking advantage of the beautiful Autumn weather.

Late last week, my most recent ex-girlfriend and I grabbed a coffee after work, then went for a walk through Kildonan Park. It's been a couple of weeks since we went our separate ways, and after a cooling off period, we decided to remain friends. During our walk, we talked about the usual stuff - work, cats, travel, etc - and cracked a few jokes about the state of society in general. She's good that way.

Somewhere around the Witches' Hut the conversation took an interesting turn.

Without hesitation, I answered, "A roof over my head, food on the table, and clean drinking water."

"Well," I added, "adequate sanitation facilities would be nice."

"Pretty much, yeah," I laughed, "maybe room to write my Manifesto, but after that, everything else is gravy."

"Seriously, that's it?" she asked, "Nothing else?"

"Well, you won't leave your husband, so what else would I want?" I quizzed.

"You asked me what I wanted out of life," I clarified, "not what I'd wish for if the 'Djinni of the Lamp' granted me three wishes."

"Fair enough," she surrendered, "but let me rephrase: above and beyond your basic human rights, what would you want in life?"

"That's better!" I laughed, "But to be honest, there's not a lot I really want from life."

"Why not?" she asked

"I don't know," I replied, "I guess I just don't have any real need for anything else, so I've never really thought about it. I mean, I can grab a coffee when I want, take a walk through the park, the Forks, or the Exchange when I want. Hell, give me peace, quiet, a drink, and a cigar and I'm happy."

"Which is it?" I laughingly inquired, "The smoking or the drinking?"

"Huh?" I said, stopping dead in my tracks.

"Think about what you just said," she explained, "You basically said 'that you're happy because you can do whatever you want whenever you want', didn't you?

"In a nutshell, yes," she smiled, "and at the back of your mind, you think getting married would put an end to that, don't you?"

"You're close," I said, impressed, "but you're off on one part of the equation."

"Which part is that?" she asked, giving me that 'you're not weaselling out of this one' look.

"That reasoning isn't at the back of my mind," I retorted, "but at the forefront!"

The preceding exchange happened in sometime in early November 2009, and was transcribed on 11/26/2009.  I never finished it, and the remaining bits of the conversation are lost to time.  But I do know how it ended.  She told me I'd never be truly happy until I dropped the me, me, me attitude.  I told her I was fighting fire with fire, happily pointing out that she was married the whole time we were dating (which is a tad selfish as well), and that my previous relationship ended when the girl described me as a "work-in-progress" to her girlfriends at a hen-party held in my own house.  I was so tired of women trying to mold me into what they wanted, that I decided to remain "selfishly single" from there on in.

Here we are, two years later, and everything has changed.  But let's back up a year.

I'd spent 2010 largely single.  I'd made a few dates here and there, but nobody held my interest for long.  I'd happily accepted the probability that I'd be single for the rest of my life.

But, as always, it didn't turn out that way.

In September, an estranged friend had become single.  We'd been chatting (and reconnecting) on Facebook, our blogs, and MSN for a few months, and when news broke about their break up, I messaged her to make sure she was alright.  She was.

We'd continued chatting over the next month, and eventually agreed to meet for coffee for the first time in eight years.  She was a Girl Guide leader, and they were on their cookie drive... so I asked her to put me down for three or four boxes.  We met for coffee at Polo Park that fateful night, under the pretext of selling me cookies, and ended up chatting for hours.

It had been great seeing her.  We agreed that we should do this more often, and we parted ways.

We chatted for a bit on Facebook afterwards, and a half hour in, she pulled the rug out from under me... by asking me out.

Jillian and I went for our first date (to see Avatar at Imax) in early November, had a whirlwind romance, and on December 23rd, 2010, I proposed.  She said YES.

We moved her into my house shortly after Christmas.

It's now a year later, and things couldn't be better.  Wedding plans are humming along (six more months!), the household is shaping up, we've renewed our faith in God, and we make each other happy (and other people sick).

If you were to ask me two years ago if I'd ever thought I'd be engaged to be married, I probably would have snickered.  It'd never happen.  Never in a million years!

So, to my unnamed ex-girlfriend in the first conversation, I say this: 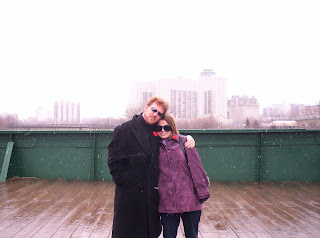