Happy Valentine's Day to all my friends, readers, search engine crawlers, and spambots.

Much like life, Valentine's Day is what you make of it.  To a romantic, it's the culmination of a year's worth of love.  To a cynic, it's a meaningless marketing event, making money off of gullible, lovestruck fools and the duty-bound husbands of bridezillas.

To which category do you belong?

I used to belong to the latter.  I admit it.  I saw Valentine's Day as the biggest ripoff ever, sentiment being cynically exploited by the greeting card, florist, and confectioners lobby.  If you truly love someone, why do you need one specific day a year to show it?  Why do you need to spend a ton of money doing it?

Do you know what made me switch?

It was reemphasising those very questions.

For us romantics, it's an excuse to be sickeningly lovey-dovey and to go all-out.  I'm looking forward to spending time with Jillian tonight, cooking her dinner, working on our wedding invitations, and stressing the foundations of the house.  It's all about spending time with (not money on) the one you love.

So, to all you cynics out there, I say this:


Pull your head out of your ass, and tell someone you love them.
It won't kill you.
(Jealous spouses notwithstanding)

Due to Illness, the part of CJ will be played by... CJ.

Okay, it wasn't that bad.  My first attempt at audience participation and collaboration ended in slight disappointment.  While I did indeed receive a number of submissions from readers, none really fit.

There were a couple of very well-written pieces on the American presidential race, a few on our own Canadian political scene, the comparative microcosm of Winnipeg City Hall, and even an essay on the recent Planned Parenthood funding issue.  Great topics all, but not for Conceit & Sociopathy.  I've encouraged the writers to start their own blogs, as I'm certain they'd do well.

I also received a number of submissions that can only be described as abusive, but after twenty-plus years of Usenet posting, it rolled right off my back.  Apart from the pictures of a rock and a stool sample (as mentioned last post), I was also treated to a picture of a child with Down's Syndrome, which I did not find funny.  Both were submitted by a user with a disposable Gmail account.  I advised the submitter to go back to the Winnipeg Free Press and CBC comments section until they grow up.

So, while the idea didn't quite work the way I'd hoped, I may try it again sometime in the future.  As every exagerratedly proud man knows, when life knocks you off your (high) horse, you pick yourself up, dust yourself off, and get back in the saddle.

Work on the podcast, Public Disservice, is coming along.  Still have a walking tour, a bit of writing, and a bit of organizing to do.  I'm trying to work on my breathing and cadence as well, so I don't run out of breath & gasp for air between sentences.  Working with a diminished lung capacity certainly doesn't help... neither does this cold I can't seem to shake.

It's been an interesting experience nonetheless, certainly different from my other works in terms of presentation.  When writing for magazines, blogs, and webpages (other than my own), I never really concerned myself with presentation.  I just wrote whatever I was writing off the top of my head (I never use outlines), checked spelling and grammar, reworded when necessary, and let the layout people deal with the rest.

For me, audio production is trickier.  Hitherto unknown territory for me, I find myself having to think in three dimensions.  As mentioned before, I'm working on my breathing and cadence, but also on keeping the tone of my voice consistent, while trying to stay on topic.  To help with that, I'm learning to work off an outline for the first time ever.  I thought about writing a script and reading off of that, but then it'd sound like I'm reading from a script, and I'd rather like to avoid that if possible.


My final issue is one of episode length.  While I have enough planned to keep me talking for a couple of hours, it won't leave me anything for the next episodes.  Right now I'm leaning toward a half-hour run time.


At any rate, the premiere episode of Public Disservice will rear its ugly head near the end of February, and will be announced here on Conceit & Sociopathy.

Due to Illness, the Part of CJ will be played by ... a rock.

Today the part of CJ will be played by this rock it has a better personality but u shouldn't notice much differnce. 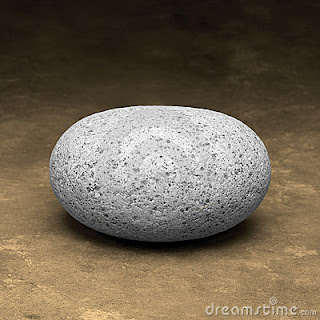 (CJ's note:  I'm only posting this because it made me laugh.  The anonymous submitter also included a second photo of a stool sample, which I've opted not to post.  From here on in, serious submissions only, please.  Surely we can do better..?)