On Good Stewardship and the Mixing of Vices, part II

Flushed with enthusiasm from my previous successes, I tried my hand at infusing a few more cigars with different types of alcohol.

This time around, I chose brandy.

One cigar each, infused with Meukow Vanilla Cognac, Napoleon VSOP Brandy, or McGuinness Cherry Brandy.  I used the same method as before:  soaked a cotton makeup pad with the appropriate spirit, threw it into a Ziploc bag, placed a dried-out cigar in the bag, sealed it, and let it sit for a few days.

This time around, the cigars were forgotten over the course of our busy week.  I remembered about them this morning while getting ready for work... when I opened the bags, the cigars were quite damp and squishy!

I figured the best way to dry them out would be by placing them into my humidor with the balance of my dried-out cigars.  Let the dried-out ones absorb some of the excess moisture from the newly-infused ones... how symbiotic.

I tried the one infused with Vanilla Cognac on my lunch break today.  It was heavenly... at least it was until I dropped the cigar halfway through.

Ah well, plenty more where that came from.

The Dream is Dead.

My other blog, The Speakeasy, has closed its doors for good.

I originally started the blog a few years ago to document my garage renovations.  The original plan was to convert my disused garage into a four-season gazebo, complete with fireplace, skylights, HVAC system, and wet bar!  I wasn't driving, and my '86 Daytona inside the garage was completely undrivable, so The Speakeasy seemed to be the perfect idea.

At the time, I was living it up as a bachelor and was looking for a place to throw the kind of parties I wanted to attend myself... laid-back, sophisticated affairs with premium cigars, great drinks, good company, and plenty of outre-lounge music.

The fact that I could do it fairly inexpensively was the icing on the cake.

Unfortunately, the world being what it is, The Speakeasy never came to fruition.  Suffering a number of financial setbacks (and tanking investments) saw the project's start date pushed further and further back, until it lost priority altogether.

Then I reconnected with Jillian, got engaged, and bought a SUV... realizing we needed somewhere to park the thing, we reclaimed the garage, effectively killing the project for good.

While we could renovate the house to accomodate the sort of grown-up parties we'd love to throw, we're also looking at moving in a year or so... meaning the project would be unfeasible.  The dream is dead.

So tonight, I'll be raising a glass to what might have been.

On Good Stewardship and the Mixing of Vices

It was a slow workday afternoon last Friday.  The phones weren't ringing, the emails were nonexistant, and the fax machine was quiet.  Even the weekend warrior walk-ins were few and far between!  This made the afternoon drrrrraaaaaagggg.

I'd read all my favourite blogs, exhausted Twitter and Facebook, and even made sure my work was up to date.  With little else to do, and with my sanity nearing its end, I opted to go for a walk.  Grabbing my sunglasses off my cigar humidor, I wondered aloud if I had any cigars left.  To my delight, I had two!

I'd neglected to refill the sponge in the humistat for quite some time, so the humidor was slightly less than humid... the inside was sitting at 20% humidity.  Not exactly conducive to keeping one's cigars fresh.

I figured "What the Hell", grabbed the older cigar of the two, borrowed my coworker Nick's lighter, and walked outside.

The cigar was horribly dried out.  I carefully trimmed the end off with my trimmer, making sure to work slowly, so the end didn't disintegrate and unravel the works.  No problem there.

The cigar was pretty harsh, burned a bit too hot and fast for my liking, but it was a welcome relief from the tedium inside the office.

I was out there for about half an hour.  A few of the guys saw me outside and decided to have their smoke breaks with me.  Our camaraderie was great!

While I was out there, I wondered if there were ways to reconstitute or rehydrate dried out cigars.  A few suggestions (and encouragement) came courtesy of Facebook, so I took some of the ideas and, after searching for answers on Google, I ran with them.

When I got home that evening, I grabbed a couple of the dried-out Rafael Gonzales' I had in my living room humidor.  They had been in a nearly bone-dry humidor for the better part of a year!  Figuring I had nothing to lose, I grabbed two for experimentation purposes, along with a flask full of Wild Turkey bourbon (which had probably been in there a couple of years).

One of the solutions I found was to soak a cotton ball with water, put it in a ziploc bag with a dried out cigar, and seal the bag (making sure the two don't touch).  The tobacco in a cigar is highly absorbent, and will slowly draw the water from the cotton ball.

Another solution was to pour a bit of brandy (or whiskey, cognac, etc) into a glass and to dip the end of the cigar into it.  A third proposed pouring water (or your alcohol of choice) into a shotglass and leaving it in a humidor with your cigars.

Not wanting to risk all the cigars in the humidor, I combined the first two solutions.  As we didn't have any cotton balls in the house, I grabbed a couple of Jillian's cotton makeup removal pads... just like cotton balls, but flat.  I soaked two of 'em in the bourbon, and threw 'em in the ziploc bag, not bothering to wring them out.  I carefully placed the cigars into the bag and sealed it up, making sure the cigars and cotton pads weren't touching.  I put the bags up on my old radio and left them alone for the weekend.


Fast forward to this morning.

Deciding that the cigars had had ample time to absorb the bourbon, I removed them from the bag.  Whew... they smelled like year-old Wild Turkey alright!  I put the cigars into my portable humidor and threw that into my lunchbox.  My lunch break couldn't come fast enough!

When it did, I excitedly scurried outside, trimmed the end of the cigar, and lit it.

Was it worth the effort?  It was indeed!  I was rewarded with one of the best cigars I have ever had the pleasure of smoking. 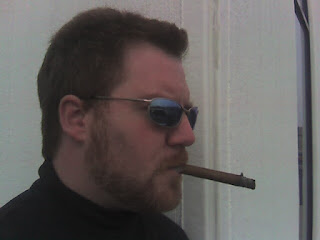 
It was also a Hell of a lot of fun being creative with things I'd have normally thrown away.  The cigars would have been tossed, and the bourbon would have been used to unclog my sink.

So, with eight or so more cigars still in the non-humid humidor, and with a full liquor cabinet, I'm going to repeat the experiment with different spirits.

Tonight's attempt will be infusing another Rafael Gonzales cigar with cherry brandy, one with vanilla Cognac, and another with Glenfiddich Scotch.  I'll hopefully have more good news to report.

I really have to check the stats page of my blog more often, it's mildly amusing.  The search terms that lead people to my blog are... interesting.

I feel like a Trapdoor Spider lying in wait... and this is the bait I use to lure unsuspecting passersby to my corner of the Blogosphere:

Don't Play Tetris With Your Life.

Ordinarily, this wouldn't mean much to me at all.  Age is just a number, right?  I sure as Hell thought so, at least until this past Monday.  So what changed?

I looked in the mirror...

... and for the first time, I didn't see a snide, know-it-all, jaded twentysomething staring back at me.

Instead, I saw a man in the prime of his life.

So, I had a conversation with this man.

"CJ," my mirror image began, "I have something to tell you."

"Oh, do ya?", I said, plagiarizing Cherenkov.

"Yeah," he continued, "Don't play Tetris with your life."

I sat there with a dumb look on my face.  I probably drooled a bit.  But I think I knew what he meant.

"Do you understand," he asked, "Or do I need to spell it out for you?"

"You're stuck in this narrow playing field you've created for yourself," he berated, "and you have so many things going on.  You're twisting and turning yourself and your schedule, trying to fit them all in, and all the while more and more things keep coming at you.  They're piling up and piling up, but no matter how fast you work, no matter how well you fit things in, they'll eventually overwhelm you... then it's gave over."

"You ain't no spring chicken, CJ," he pointed out rather pointedly, "and given your family history and current lifestyle, it's Game Over... and you're out of quarters."

At which point, the phone rang and I snapped back to reality.

My first thought was, "Why did it have to be Tetris?  Couldn't he have picked Soko-Ban?  I was good at Soko-ban!"


It's time to shift priorities.  I'm making a number of changes in my life, dropping some things and focusing on what's important... and what's most important is marriage.

Yes, the big day is just over two months away and things need to be finalized.  We also have to get the house in shape so we can receive guests after the big event, and also to make room for any children we're blessed with.  No small order, to be sure.  I also want more time to concentrate on blogging and improving my writing because...

Some of it will be content rehashed from this blog, recycled from my backcatalogue of even earlier writing, some will be material from my upcoming podcast, and some will be freshly excreted.  Hoping to have it written by the middle of next year.

Speaking of the podcast, I'm now looking at a mid-March launch date.  Gotta finish a few things before I can make this a priority.

Things will be quiet here on C&S for the next couple of weeks, and I'm hoping to have something to show you all when I return.