The big day is just over two weeks away.

With Wedding preparations going smoothly (almost too smooth), it is almost fait accompli in most of our family & friends' eyes.

Talk then centered first on our honeymoon (Boston & Worcester, and New York), then inevitably onto children.

Discussions among our respective coworkers couldn't be more different;  Jillian's coworkers have a pool going, taking bets on how long after the Wedding it'll take for us to get pregnant.  Mine are taking bets to see when the first of our children is arrested on terrorism charges.

I an only imagine getting a call from their elementary school...

Principal:  Mr. and Mrs. Wheeler, this is Principal Oakley at Good Shepherd Elementary.  We have a bit of a problem.

CJ: Oh?  What have they done this time?!

Principal:  It appears little Rachel and Siobhan have taken over the gymnasium again and are holding their teacher and classmates hostage.  We'd like you to come in as a negotiator.

CJ: We don't negotiate with terrorists!  I did warn you, at our last parent-teacher meeting, about making them jump rope.  You know damned well they see the skipping rope as a symbol of male oppression...


All kidding aside, it seems as though everyone has ideas and suggestions in regards to child-rearing.  Everyone has advice on what to do, and what to expect.  My usual response is a condescending look and a curt "Remember, these are mine & Jill's kids we're speaking of," at which point the person giving me advice has a frightened look of realization come across their face.

If you've been following my online missives over the last twenty years, you'll know I'm not exactly... er.. sane.  I'm given to bouts of distemper, megalomania, outright sociopathy, and occasional cartoon supervilliany.  I've been studying war and warfare throughout the ages, enjoy a good PsyOps exploit, and I used to leave a copy of the CIA Field Interrogation Manual on my desk when interviewing potential new employees.

Jillian was crowned Canadian Debating Champion in high school (for your own sake, don't ever call her a "master debater"), is as stubborn as I am, and also has a mean streak a mile wide.  She's also tough as nails.

To top it off, we're both fucking brilliant.


My office mates and I were talking about kids today... and the end of the conversation went something like this:

Boss:  (singing "The Wheels on the Bus")... You knooow, it's only a matter of time 'til you start singing these songs..!

CJ: My children will hear no such thing.

Boss:  Ooooh, I'm sure they wiiiillll...

CJ:  Not if I have anything to say about it.

Boss:  You'll be watching Barney the purple dinosaur before you know it!

CJ:  Fuck that!  My idea of quality children's programming is Al-Jazeera!

The boss was speechless. 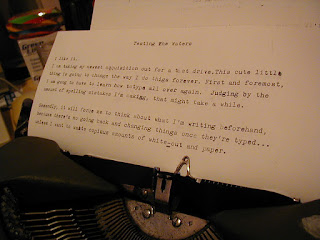 
Always looking for new ways to express myself, I have been exploring the Typosphere of late.

The Typosphere, because I know you're wondering, is a community of bloggers who use typewriters to write their blog entries, then scan the typed pages & post 'em to their blog.


Being a fan of keeping older technologies useful in this day and age, naturally I jumped at the chance to join this community.  After a week of scouring the used sites and thrift stores, I happened upon an Empire Aristocrat portable typewriter for $15... with the appropriate ribbon being had for $10 on eBay.

My first typewritten post was uploaded to Conceited Jerk Dot Com as part of my entry in the 2012 Retrochallenge Winter Warmup (my typing skills have improved greatly since then).  Unfortunately, I haven't had much time to further delve into the Typosphere (I am preparing for my wedding next month, after all!), but will be incorporating typewritten elements into Conceited Jerk Dot Com's Tenth Anniversary redesign this summer.

I'm taking the main site in a whole new direction (which is why I've blown so many deadlines).  No longer relegated to being Conceit & Sociopathy's supplementary blog, the site will now showcase my less commercial creative works and experiments in media... and, of course, to follow my life's goal of taking advantage of anything as a publishing medium!

Some of my plans include:

Not to mention a few things done using old computers.  Pointless?  Probably, but then so is the rest of the Internet when you get right down to it.

The next few months are gonna be a blast!  Hope you're up for the ride.

I've noticed a lot of traffic from archive.org visiting the main site (probably checking to see if I really have been around for ten years, lol).  One thing I'd like to point out is that I only registered the domain www.conceitedjerk.com in 2006.  If you're looking for earlier (2002 - 2006) iterations of the site, search under the URL http://conceitedjerk.tripod.com/.  You're welcome.  Oh, and I'll apologize in advance for my heavy use of the unreadable Haettenschweiler font on certain pages... it looked good at the time!

Posted by Shaun M Wheeler at 20:00 No comments: