Blog Action Day: The Power of We (Intro)

When I heard that the topic for this year's Blog Action Day was "The Power of We", I was reminded of a magazine article I'd read some years ago.

Those of us old enough to remember Spin Magazine might also remember an "alternative" music festival called Lollapalooza.  It was the Woodstock of Generation X!  In 1992 (Good Lord, was it really twenty years ago?!), during the buildup to the event, Spin ran a "Lollapalooza Survival Guide", advising us disaffected and impressionable young adults what to wear, what to bring, and why.

One of the items on the list was deodorant.  Going through the whys and wherefores, the author of the piece (whose name escapes me) wrote something to the effect of "Your dreams of a unified front raising their fists in unison might seem like a good idea now, but wait until the wind changes!".

I remember laughing at the thought, until I realized the author was dead serious... and unfortunately, he or she likely spoke from experience.


I'm a history buff and, as my regular readers know, I am fascinated by different (and obsolete) means of communications.  But what many of you don't know is that I have also studied (informally, of course) military history and psychological warfare extensively, and I am also a collector of 20th century propaganda. 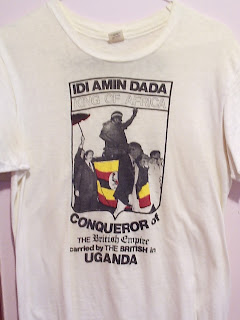 Such as this original Idi Amin shirt from the 70s


As a small kid in the mid-to-late 1970s, I was enthralled by the news on TV.  I experienced (second-hand) the turmoil and resulting paranoia of worldwide terrorist attacks, hijackings of airlines, bombings, Middle East tensions, hostage taking, OPEC and soaring gas prices, and the excitement of protest and revolution.  All of which continued (while I watched) into the 80s, then the 90s, then the new millennium, and continues to this day.

As a kid, however, I didn't truly understand what was happening right before my eyes.  All I saw was guns, planes, bombs, hostages, artillery, and most importantly, explosions... it was all just another TV (or alt-rock) show, and what a show it was!

It wasn't until much later that I learned about the human cost of the spectacle.


Today, as my Blog Action Day post, I'd like to share with you a multipart piece I started years ago entitled "The Changing of the Seasons".  I'll be posting throughout the day, following up with a post that ties everything (from Lollapalooza to propaganda) together in a relevant manner.

We'll be back after this commercial break...
Posted by Shaun M Wheeler at 10:15

The View from Seven said...

I was that kind of news-curious kid, too. Late '70s and early '80s network news had, by today's standards, great coverage of an outside world full of conflict and intrigue.

I think it was about '79 that I started watching the news with my parents. An interesting time to start learning about the outside world, amid revolutions in Iran and Nicaragua, the civil war in El Salvador (took a while to figure out why the government was fighting the "gorillas", though), major air disasters in Chicago and Antarctica, the gasoline crisis in the U.S., etc.

Funny, I had the same questions about why they were fighting gorillas!

Oddly enough, apart from TV, a lot of my knowledge of the events of the 70s came from Mad Magazine. I learned a lot through satire.

I was also news and current event curious. However...I also got told to "turn off the darn TV and read a book!" ;) , so, some of the great "television moments" of my era are lost to me. Just ask Shaun..I can't remember a single episode of "Alf". ;)

Seriously, though, I think it was at age eleven that I became intensely interested in issues such as the Vietnam War and the Civil Rights movement. For me, it was always how history impacted current events. Thankfully, I had a very-well read hippie for a Mom, who was always willing to nurture her daughter's stubborn..er..independent spirit.

Don't worry about Alf. You didn't miss much.

Although, given recent revelations about the set (of Alf) being a deathtrap for the cast, it'd be a right hoot to see the blooper/outtake reels...

Given what I've witnessed of most TV, I don't think I've missed much, period.