It's that time of year again.

Mornings are getting progressively cooler, cool enough for me to start bringing coffee along on my commute.  It's been a few months since I last used my commuter mug, and I won't describe what I found inside when I pulled it down from the cupboard.  Suffice it to say, it's only of interest to people of science.

With a pot of coffee brewed, and not enough time to drink it all before I left to catch my bus, I scrambled to find another commuter cup in the cupboard.  After digging through the cupboard as quietly as I could (didn't want to wake Astrid, and thus Jill), I waded through the collection of mismatched cups and lids.  After finding a lid that fit a cup, I poured my coffee and headed out the door.

By the time I got to my bus stop, I was wearing some of the coffee.  Sure enough, I'd neglected to close the sliding lid before I dashed off.  I'm used to this happening, which is why I tend to wear darker colours (or light browns/beiges) around this time of year.

After getting on the bus and securing my belongings, I opened the cup and took a sip... and promptly dribbled coffee down my beard and onto my chest.  Turns out the lid that fit... didn't.  Was probably for a different but similar cup.

After cursing myself for rushing this morning, I mopped up what I could with the single crumpled tissue I had in my pocket, and spent the rest of the ride with a leaky cup, dripping wet hands, and a wet patch on my shirt.

I'm sure my fellow commuters can relate...

Tonight's task will be to pick up a decent commuter mug.  Non-plastic, of course, both for environmental and thermal reasons (coffee cools down too quickly in a plastic mug).  I'm specifically looking for one without a handle, that will also fit in my Bar-ista cup holder... thinking about a ceramic mug that's in the same form-factor as a Starbucks cup.

That's it for now, more relatable workday drivel to come later in the week.

A Couple of Old Friends Dropped By Today

A couple of old friends from Europe dropped by this evening.  It had been a while, we haven't seen each other since before Jillian and I were married - possibly even before we started dating in the late Noughts.

I've truly missed these old, dear friends.  It was a heartwarming reunion for the three of us, and now that they're back in my life, we'll always be in touch. 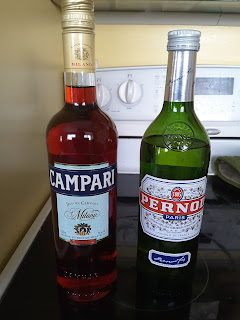 The only two things I miss from my bachelor days are cocktails and cigars, and with Autumn a little under a month away, it's time I cleared a path to my liquor cabinet.

It's been a while since my cocktail heyday, and I am terribly out of practice.  If it weren't for muscle memory, I don't think that Martini I made around Christmas would have turned out at all.  Worse still, I couldn't remember my signature Martini recipe... the same recipe I used thrice daily for several years!  This is not good.  Not good at all.

Hell, when I went to have a little Pernod this afternoon, I realized I didn't have the glassware anymore!  A most of my barware was broken when we moved to Westdale in 2015, so I was forced to use a generic glass tumbler.  So uncouth!  Suffice it to say, this next payday, I'll be buying a cheap set of glassware (Hiball glasses, tumblers, etc) from Wal-Mart until I'm able to invest in a quality set.

(My Martini glasses were in a separate box, and survived the move.)

Anyhow, time to take stock.  Do any of you know where in Winnipeg I can buy soda bulbs/chargers for my soda siphon?  I've tried a few Wal-marts, Canadian Tires, and Superstores, but none have stock.  I'd rather buy local than order online...