In the three years since the last instalment, I've been enjoying my favourite magazines in their digital form.

In summer 2017, I invested in a then-new Samsung tablet and renewed a few magazine subscriptions via Zinio, Issuu, and Texture.  The Samsung's large screen lent itself well to the reading of magazines, and I routinely read two dozen magazines per month. 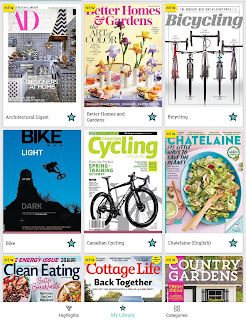 My favourite so far has been Texture.  It has most of the magazines I want to read, and for a monthly fee I can read any of the hundreds of magazines they offer.  For the past couple of years, I've been able to enjoy Canadian Cycling, Bicycling, Dwell, Architectural Digest, GQ, Bike Mag, and so on.

Sadly, all good things must come to an end.  I received the following message in my inbox today: 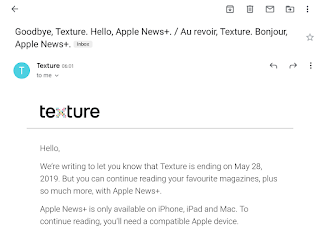 This left me heartbroken.  After May 28th, I'll no longer be able to read my magazines via Texture on my Samsung tablet (other than the ones I've already saved to the device).  As the tablet is only a couple of years old, I'm not looking to upgrade anytime soon, so a new iPad is not something I want right now... especially given Apple's accelerated policy of planned obsolescence.

Foolishly thinking my nine year old MacBook might handle Apple News+, I opened the App Store.  Nothing popped up.

Following the Apple News+ Link in the Texture, I was greeted with the following message: 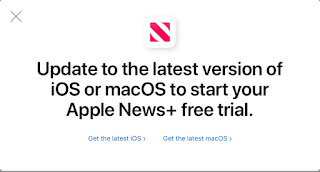 Of course, as we all know, nine years in computer years is like a couple of hundred in human years.  This 2010 MacBook can't run the latest macOS, leaving me effectively screwed.  If I want to read my Texture magazines, I'll either have to subscribe to them in Zinio at full subscription price (assuming Zinio offers them), or go back to buying print magazines again.

Frankly, I'm opting for the latter.  A monthly trip to McNally Robinson for magazines sounds pretty good, and we can help the local economy by spending money on other things while we're at the mall or surrounding area.

And for the few magazines McNally doesn't carry (or sell out quickly), I can always subscribe directly.

So, while the situation with Texture and Apple News+ certainly bites, I'll still get my magazine fix somehow.


In other news, yes, both my blog and I are still alive.  I bought the aforementioned MacBook (aka Rachelle) a few months ago to aid me in my creative pursuits (such as blogging), as my beloved Nadia is currently laid up with broken screen hinges.  Sadly, I don't have much time for said pursuits, as fatherhood and family life keep me hopping, but I get a little in when I can.

I do plan to continue blogging, updates will happen when they happen.  Perhaps more often if something inspires me, but really, does anyone really read longform commentary anymore?  Are attention spans long enough these days?

Speaking of which, I've shut down Dove Grace Design's website for good, and the accompanying blog State of Grace may follow suit soon.  I may leave it up, I may fold the content back into C&S, I don't know yet, but it's not likely to be updated anytime soon.

I've thought briefly of bringing my old typelog Smith, Wesson, Corona, and I back, as I've become interested in typewriters again, but I'll see how that plays out.  I may just make it a "feature" of this blog.  I don't know, I will see how it goes.

So, until next time, stay sane and support your local bookstores and blogosphere.